Fall is not really a thing in South Florida. I like to search for seasonal signs in the garden. The weather doesn’t give clues, the heat index today was over 100 degrees Fahrenheit. My favorite local writer (sports and fishing), Ed Killer, wrote about seasons in the morning newspaper claiming the mullet run is a season in Florida. The mullet are currently running in South Florida. A link to the article https://treasurecoast-fl.newsmemory.com?publink=261ae094c_13437fc

For Florida novices, mullet is a small baitfish that heads south for the winter swimming down the Atlantic coast of Florida. It is a seasonal marker. Traveling en masse in 1 acre sized schools of fish – an acre is 220 feet by 220 feet – that’s a lot of little fish. The mullet can be seen jumping from the water in late September and fishing gets good when all the bigger fish give chase looking for a mullet meal. A season in the land without seasons.

I look for fruit on the Beautyberry, the occasional turning red leaves on Red Maple trees, fruit on the Firebush and the flowering of the Juba Bush. These are my fall favorites and they are in my vase this Monday. All South Florida natives, unlike me, and seasonal signs of fall in the garden. Maybe if we throw the whole mullet run thing in there is actual fall here.

A closer view. The orange flowers are Firebush (Hamelia patens); purple berries, Beautyberry (Calliocarpa americana); white flowers, Juba Bush (Iresine diffusa). The Blue Willow teapot is a favorite of mine, an English teapot and long ago find in a flea market…

The other side, berries and flowers on the Firebush.

And, no, I have never eaten a mullet. They are an oily fish and supposedly good smoked over citrus wood. 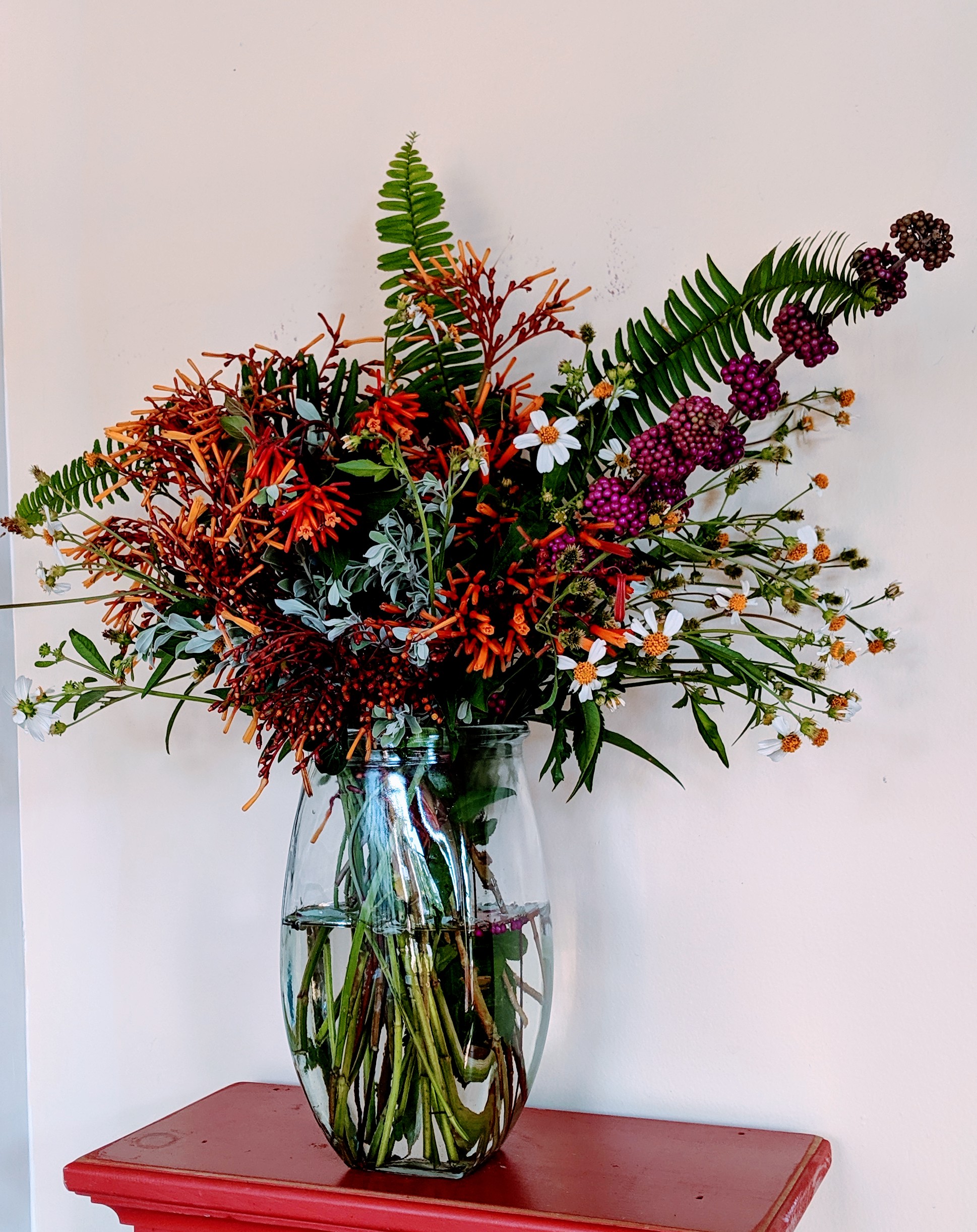 The oh so subtle signs of fall are appearing on the peninsula of Florida. Hurricane Dorian was one unmistakable sign, the hurricane season peaks on September 10. My husband declared hurricane season over and took down all the storm shutters. Signs in the garden include the formation of fruit on Beautyberry and Firebush and I have seen three (yes, 3!) Red Maples sporting red fall color. It is exciting.

My garden came through the brush with Hurricane Dorian mostly unscathed, the Beautyberry had their leaves blown off (the berries were untouched) and the Avocado tree’s leaves have windburn. A few branches down here and there, but that is about it. I wonder if I have sited the Avocado in a less than the optimal place as the leaves usually burn from one thing or another. 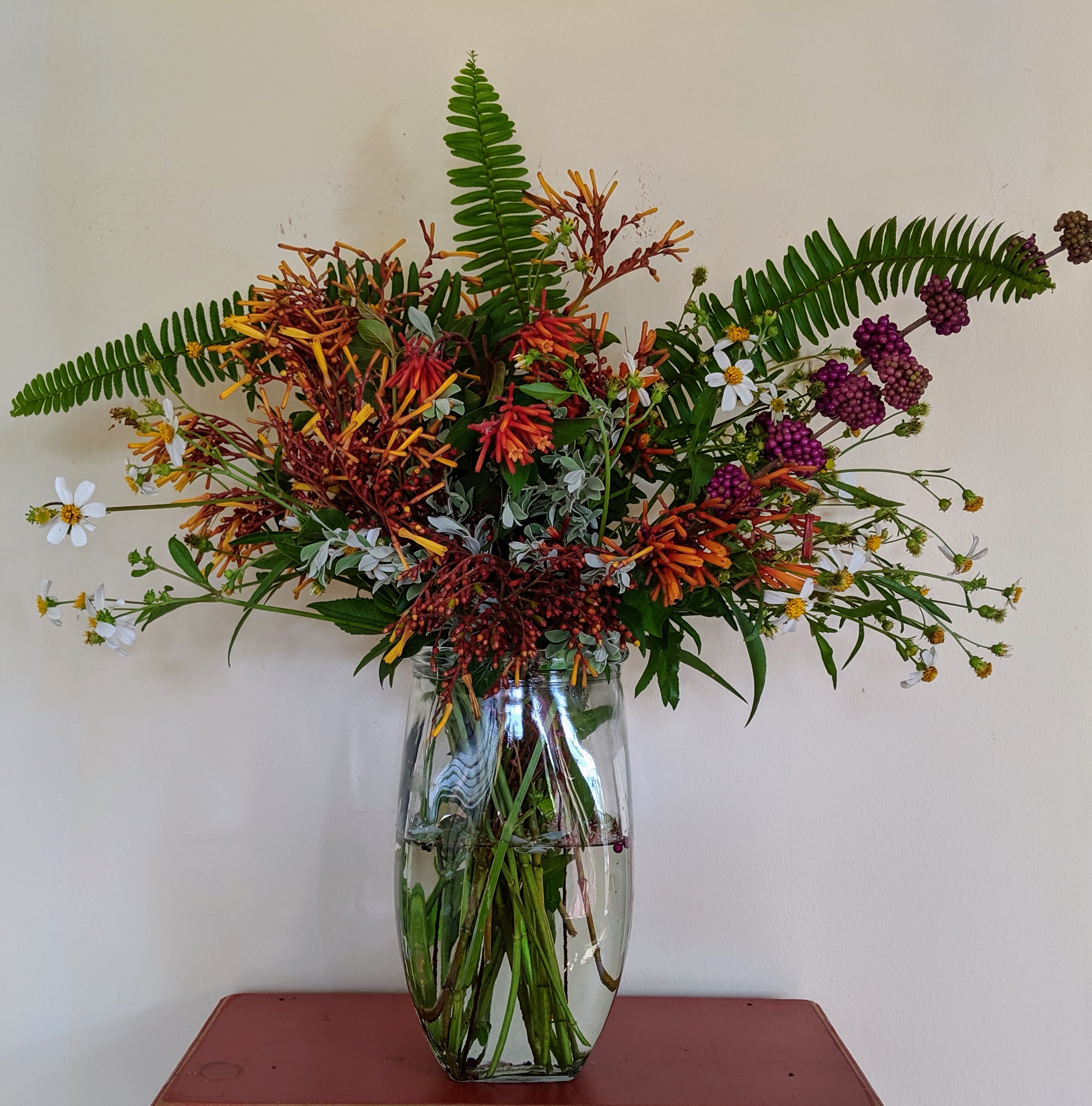 The vase is an old florist’s vase I found by the side of the road in my neighborhood. I am guessing at least thirty years old as I vaguely remember these in the 80s. Most of the plants in the vase I love for their flowers but hate for their voracious appetite for space in the garden.

The most incorrigible of the lot, in white, Spanish Needles (Bidens alba) possibly the best native pollinator in the garden – however, these reseed to the point of annoyance. In orange and red, Firebush (Hamelia patens – varieties botanically undefined) I love these shrubs, but once they get going watch out. I was told one was dwarf (4 feet) sounds great – it is probably closing in on 12 feet and still growing. Also soon to be a tree form as I love the butterflies nectaring on it (5 different butterflies seen while cutting branches for the vase). The red fruits are also from the Firebush, I have two types, the red one produces fruit that grows little plants in the garden – the orange one never does. Grey foliage is from Barometer Bush (Luecophyllum) I prune and prune and never have a dense hedge, purple flowers occasionally make it worthwhile. The purple berries, Beautyberry (Calliocarpa americana) which I love right now but not so much for the foliage. Ferns are Asian Sword Ferns, they could take over a gas station parking lot. Enough said.

My vase from last week is holding up well with the exception of the Orchid, that was asked to leave and unceremoniously composted. Here are the two vases together.

Maybe there is fall color in Florida. It is just totally different. 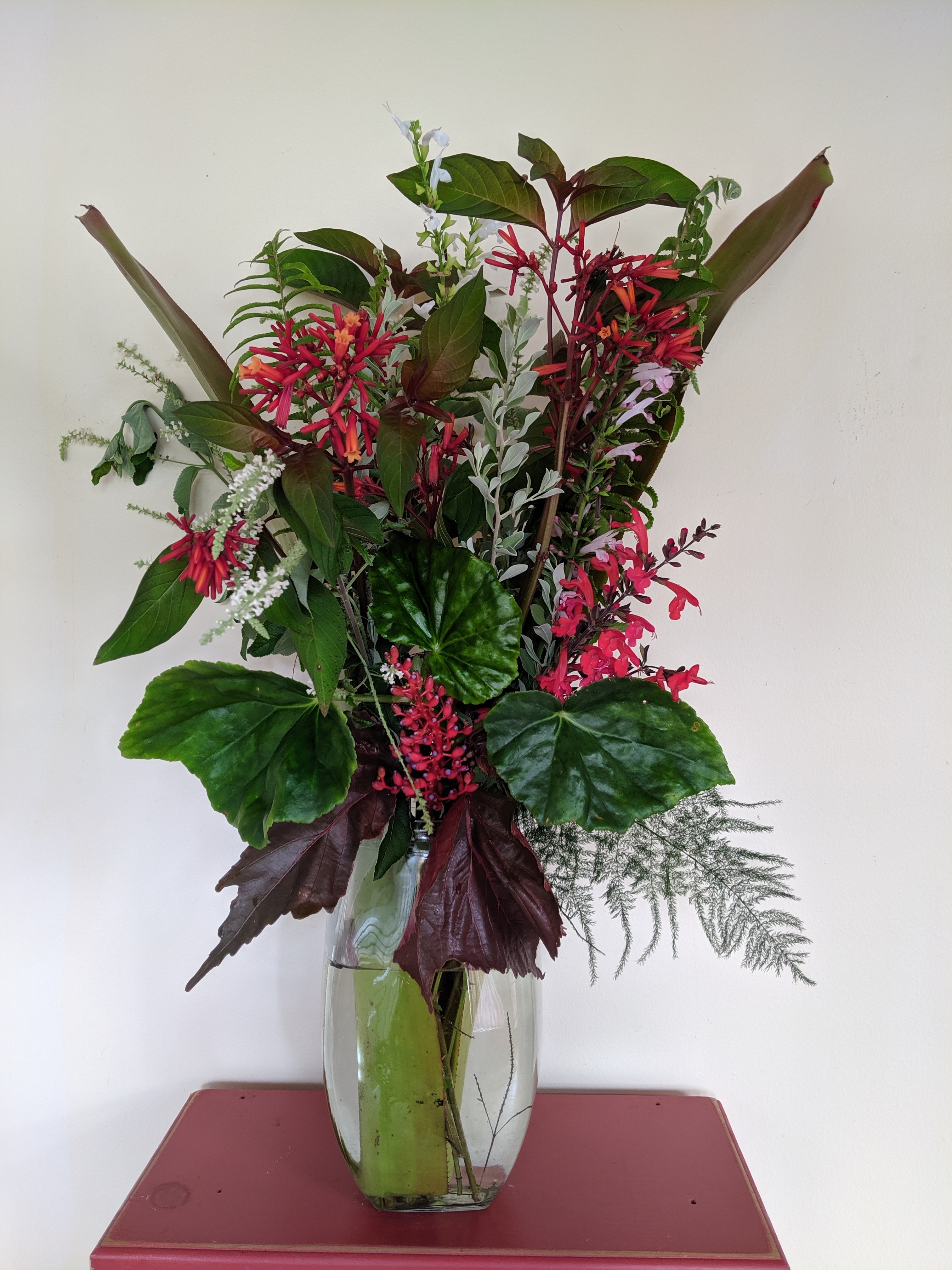 Living in South Florida requires ‘liking it hot’. The weather certainly is and in my case the colors in my garden. I like it hot. I will say a little moderation in the temperature would be meaningful. I have seen our current weather described as ‘Hell’s Front Porch’.

This morning my husband sent me this, I don’t think it was actually quite that hot. However,  I decided to retreat to the air conditioning and leave the garden, letting the weeds take over a little more. We are up to 11.5 inches of rain for August and are expecting a few more inches from a nearby tropical system. The weeds are deliriously happy and reveling in the plentiful precipitation.

A closer view of the vase. The orange tubular flowers are appropriately named for the season, Firebush (Hamelia patens var patens) There is a botany war about the proper name of this plant. I decided that is its proper name. 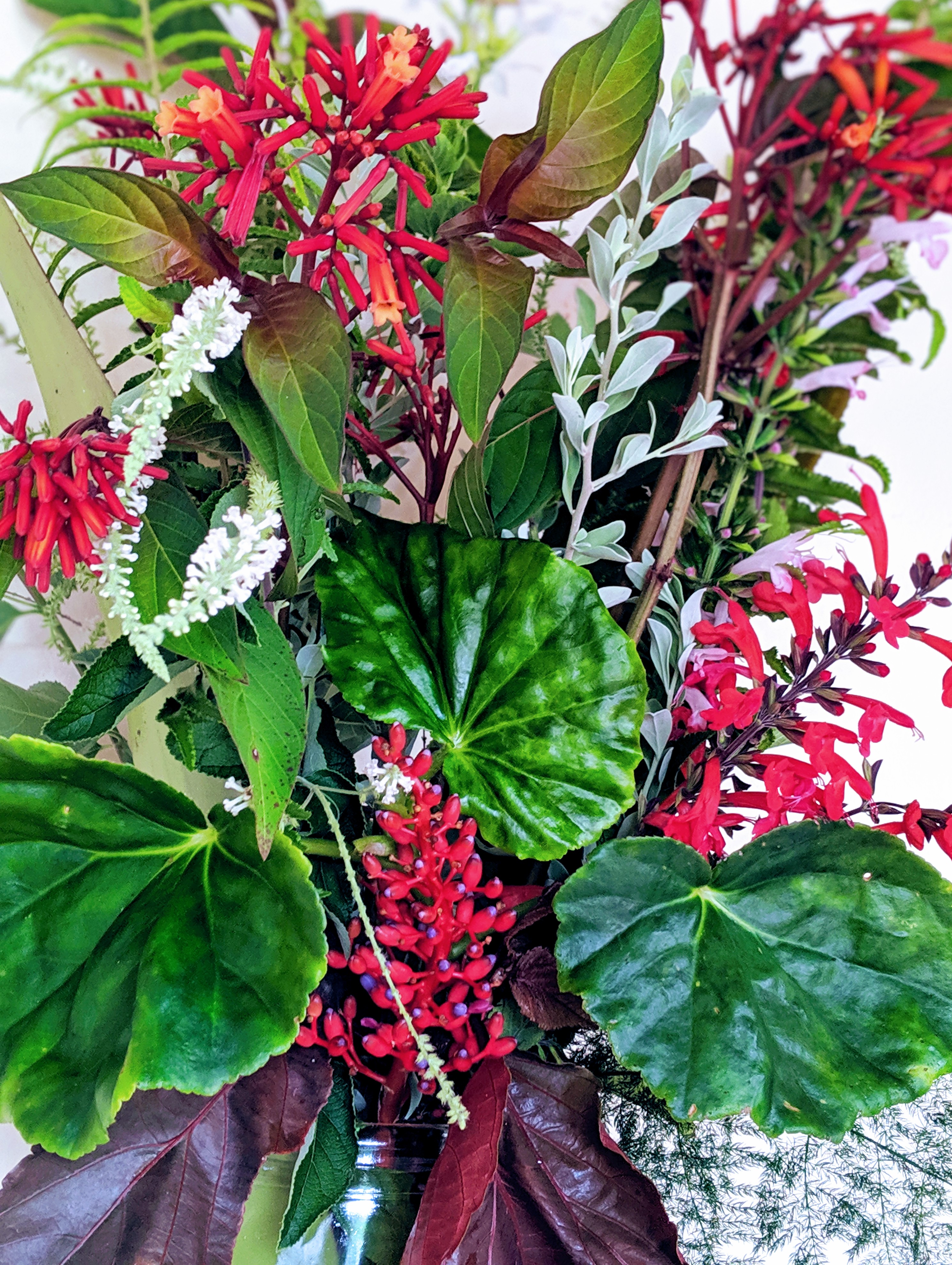 The red spikes are from Tropical Red Salvia (Salvia coccinea), enjoying a banner year with all the rain, red flower at the base of the arrangement is Miniata Bromeliad (Aechmea miniata); white spikes are from Sweet Almond (Aloysia virgata) another great butterfly plant. There is a lot of foliage in this vase. The grey foliage is from the Barometer Bush (Luecophyllum); big green leaves at the base are from Sweet Begonia (Begonia odorata ‘Alba’); burgundy foliage is from a Copperleaf (Acalphya wilkesiana); two kinds of fern – Boston Fern (Nephrolepsis exaltata) and Asparagus Fern – both are volunteers. In the back some foliage from a Blanchetiana Bromeliad (Aechmea blanchetiana ‘Lemon’)

The Firebush with a friend. The Zebra Longwing butterflies have been enjoying its nectar this summer, I have seen five butterflies hovering around the flowers more than once. These are planted beside my front door, so I see them several times a day and enjoy the flowers and the Zebras.

Every Monday Cathy at ramblinginthegarden.wordpress.com hosts In a Vase on Monday, to see more gardens and vases visit her blog.

I have seen rain this week, every day, off and on, all day long. My husband is grumpy, the dogs are grumpy and I am getting gardening stir crazy. But, the Firebush is very happy and flowering magnificently.

If anyone remembers James Taylor’s song Fire and Rain here’s a link, before you click on the link realize there is always advertising and I had nothing to do with it: James Taylor.

I decided a vintage copper teapot filled with warm colored flowers was necessary to lift my dreary spirits. After trimming some fiery flowers, I donned my red plastic raincoat and headed into the garden to see what I could find to join the Firebush. My greyhounds declined the offer to join me and sulked in their (sort of) dry beds.

My neighbor’s Mexican Flame Vine (Senecio confusus) long ago left its bounds and was hanging down over a hedge that grows between us. Beaten down from all the rain (myself, my husband,my dogs and the Mexican Flame Vine) I cut a few stems to drape over the side of the teapot. Then I discovered some Tropical Red Sage flowers (Salvia coccinea) for the back of the arrangement; added some Beach Sunflowers (Helianthus debilis); and found a few Parrotflowers (Heliconia psittacorum). I have been missing the Parrotflowers. Hurricane Irma followed by a mid thirties temperature in January nearly did them in. The few I found are about half the size they were last year. The flowers and foliage from the flourishing Firebush (Hamelia patens var patens) filled the framework of the flower arrangement. Say that 10 times fast.

Here is a close up of the flowers:

It is raining again. The good news is the Frangipani loves it and I have my first blooms this year. 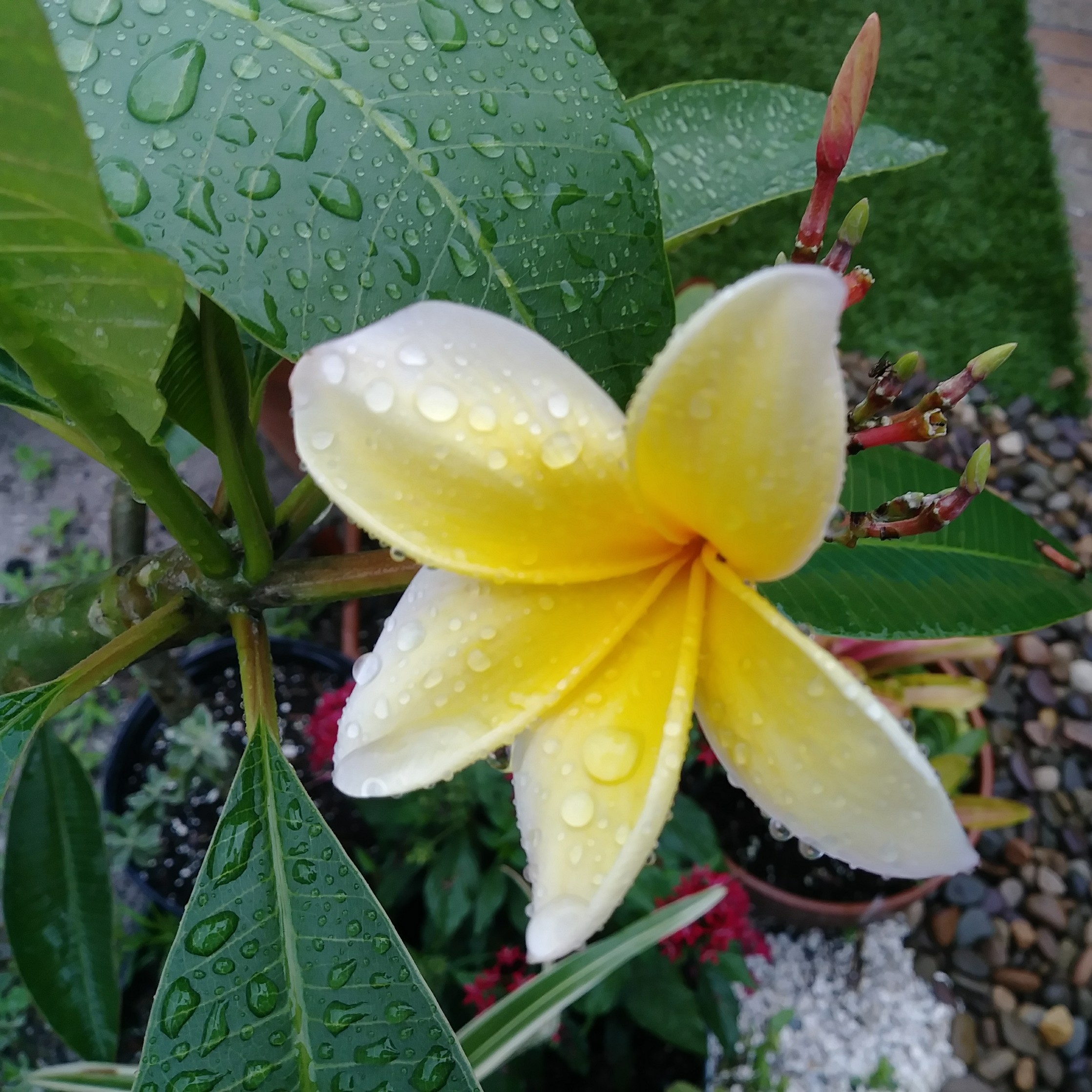