In a Vase on Monday is celebrating its sixth anniversary this Monday. Cathy, of Rambling in the Garden blog, created and hosts this meme weekly and challenged us to create a miniature vase (6″x6″) in honor of the anniversary. This  ‘vase’ is just under that and I added a crystal for Cathy as I know she likes crystals.

I decided to use shells and a tiny glass pot as my containers and then determined that they wouldn’t hold water. An additional challenge, waterless vase. The shells are a Tortoiseshell Cowrie in the glass pot and a Lightning Whelk. These shells are common to the east coast of Florida and were found on this beach near the Fort Pierce Inlet about 20 miles north of my house.

The  Lightning Whelk holds one of our native Bromeliads (Tillandsia utriculata). These are commonly known as Air Plants and it is actually illegal to collect them in Florida.  Most are grown in South America and shipped to Florida, this one came up on its own in a nearby Oak and I moved it to a booted Sabal Palm.

The brown pods are from a Senna ligustrina, another native I planted as a larval host for  Sulphur Butterflies.

Here are the Tillandsias in the booted Sabal Palm,  I am planning to add Burgundy Bromeliads and some Cattleya Orchids to the Palm. The boots are the bases of old fronds, many palms are cleaned up with a chain saw for a smooth trunk. 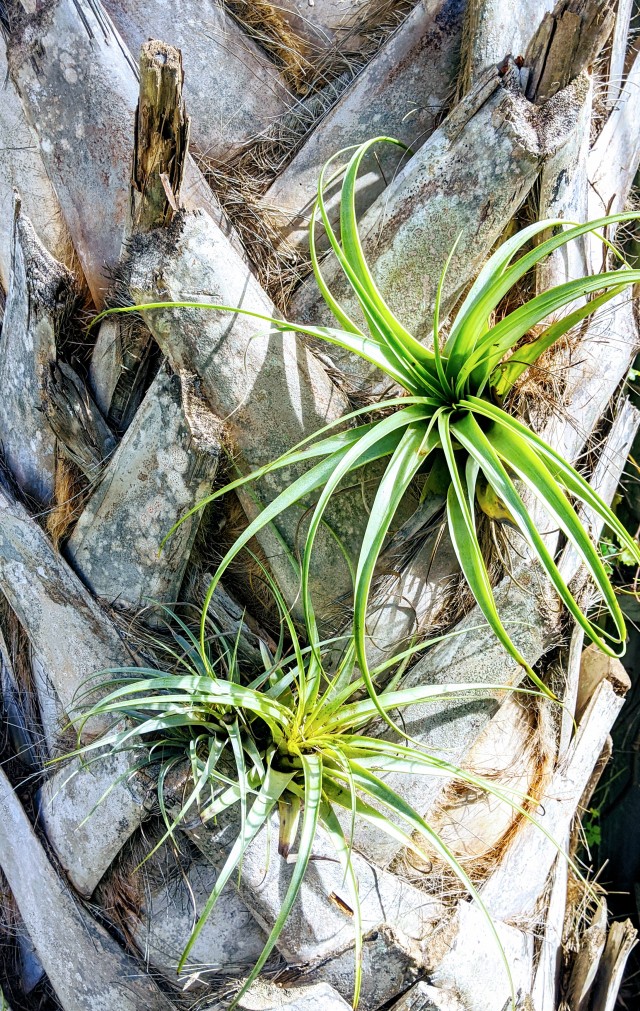 The  Tortoiseshell Cowrie holds the dried stems of a seedhead from an Adonidia Palm (Veitchii merrilli). The stems are white until the berries ripen and then turn brown. The white stems are from a younger seedhead.

A heartfelt thank you to Cathy for hosting IAVOM, it is an addictive pleasure to share a weekly vase with gardeners from all over the world – and to see theirs! To see more miniature sixth-anniversary celebrations follow this link More Vases.

24 comments on “In a Vase on Monday – Happy Anniversary”