We have been madly preparing for the arrival of Hurricane Irma this week and I have been collecting all the odd bits left outside that might go airborne. While doing this,  I noticed a number of nice blooms that are probably going to be in the Gulf of Mexico by the time In A Vase on Monday rolls around.

I am beginning to think watching the news coverage only provokes my anxiety, so I did a little research. The Caribe Indians (native to the islands of the Caribbean) had a God of Hurricanes called Juracan which is the origin of the word Hurricane. Depending on what you read, Juracan is the God of Chaos and another Goddess, Guabancex, throws the winds around to destroy everything.

This reminded me of Pele, the Hawaiian Goddess of Volcanoes, known for taking offerings thrown into the cauldron of Kilauea volcano on the Big Island of Hawaii. Hawaiians throw bottles of Vodka and flowers in the volcano to get into Pele’s good graces. I figured a few flowers thrown into a vase might help with Juracan or his lady friend, the hurricane thrower. At this point, it certainly couldn’t hurt.

So, this vase is on a Hawaiian Tiki with some muddy gloves at its feet. Maybe Pele will look out for us, too. A closer view, with storm shutters: 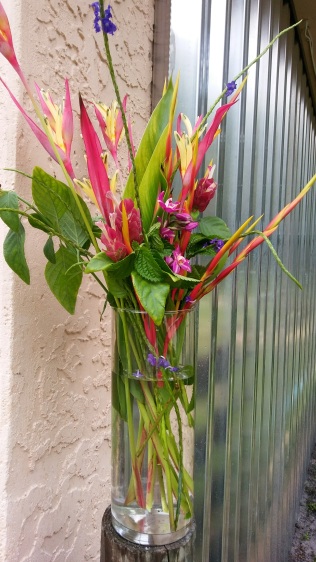 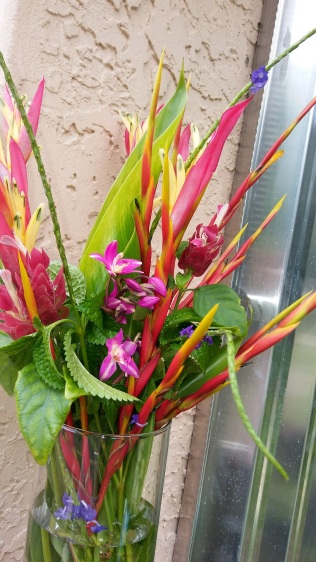 In the vase, in red, Parrotflowers, in orange and yellow, Blanchetiana Bromeliads, in purple, Spathoglottis Orchids, in blue, Porterweed. There are a few Red Shrimp Plants in the vase as well.

24 comments on “A Vase for Juracan”