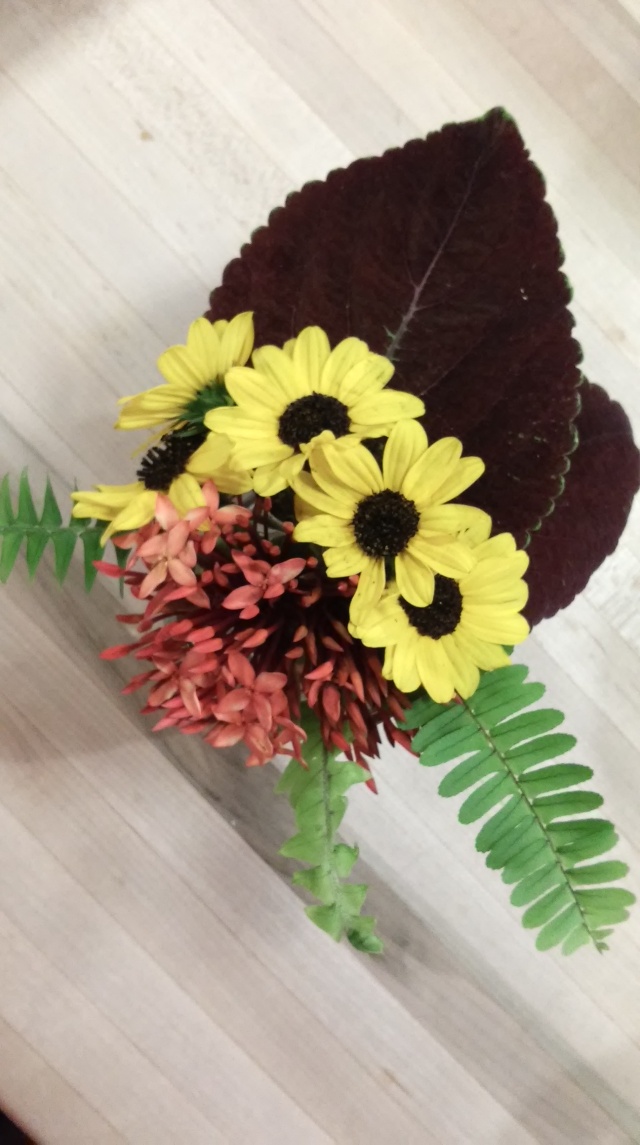 I usually start with one idea and end up with something completely different. After suffering a planting design lecture from myself, I ended up with this. The Orange (called Dwarf Red) Ixoras have started flowering in earnest, so I plucked a few of those and began to make a posy (thank you, Cathy , our meme hostess at ramblinginthegarden) for the new term I love. A posy would be called a bouquet in the US, I can’t speak for anywhere else. My posy just wasn’t working out even though the design principles were solid (more lecturing) fine textured orange contrasting with coarser yellow flowers (Beach Sunflowers) the big coarse purple Solar Sunrise Coleus leaves edged in chartreuse picking up the color of the finer textured Boston Ferns. I give myself a headache thinking about these things sometimes.

After the failure of my posy design to gel, caused primarily by structural issues due to poorly considered stem lengths, I sought a small vase for my finely considered composition. The vase was my mothers favorite pansy jar. A none too fine pressed glass jar from God knows where that was frequently filled with pansies in the winter during my childhood. Perfect for oddly too short stems. My mother, not being much of an arranger, would have loved this one. The below photo is my mother (in 1948) overlooking the pansy jar.

Pansies in South Florida are an ill considered indulgence. Lasting when temperatures are perfect, maybe two weeks, and requiring more vigilance than I possess I have forsaken them for more tropical flowers. So, no pansies for the pansy jar. But a few new plant friends have been made to grace this heirloom vase.

17 comments on “In a Vase on Monday- No Pansies Here”