This week I decided to use my heirloom vase collection and limit myself to one type of flower per vase using different foliage types to accent the flowers. The terracotta cats are also heirlooms, inherited from my mother and they are offering comments on the arrangements. The cats are contented by the brown vase, interested in the blue vase and napping by the vase on the right.

This vase was acquired by my mother on a trip through the Western United States shortly after my parents retired. The origin of the contented cat I am not so sure about. The plants in the vase are: in red, Parrotflowers (Heliconia psittacorum), the bigger leaf is from a Split Leaf Philodendron (Philodendron selloum), the green stem is a budding flower stalk from a Draceana reflexa, some people call these Pleomele. The actual Draceana flowers are an odd brown stringy affair that I was very disappointed in the last year.

This is another vase collected by my mother on her Western adventure. Made by the Ute Indian tribe, it remains a favorite of mine. I think the cat is excited by all the foliage in this one. The purple flowers are from a Hong Kong Orchid (Bauhinia purpurea) tree, the fine textured fern is the Asparagus Fern, viny elements are Muscadine Grape (Vitis rotundafolia) shoots, a few sprigs of Miniature Varigated Pineapple foliage, and the berries of Gumbo Limbo (Bursea simarouba)

The vase is a blown glass footed object collected by my in laws at their various arts and crafts show outings. It reminds me of them and I use it for small arrangements. The cat is snoozing here as he is worn out from remembering the botanical names in the previous vase. This is simply a bunch of Beach Sunflowers (Helianthus debilis) backed by Asian Sword Fern.

I also inherited my mother’s cat, she is now old enough to drive.

For many years I have held a dream of taking an oh so cute picture of my Greyhounds with Christmas antlers and using it as a Holiday card. Here is the result of my latest attempt.

The cat was asleep so I tried it on her:

Cat not even wearing headgear

A few years ago I tried with two dogs, Bullitt and My Girl:

And they got bored: 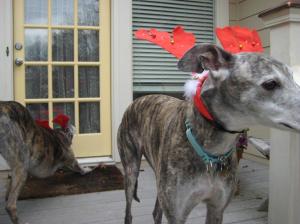 Is there a treat in the house?

I finally got one good picture of Bullitt:

Then realized the antlers should have been behind his ears. After thinking it over, perhaps this is the best solution:

The most cooperative Greyhound

Buy some cards and put the antlers on the concrete Greyhound.

I have a fluffy white cat, she is long haired; an heirloom cat. The cat is heirloom because I inherited her. This cat originally belonged to my parents and then to my older brother, all have passed on – yet the cat is still around. My parents got the cat the year before my father passed on and kitty was my mother’s best friend until she died; then my brother adopted the cat and he passed on. A friend suggested maybe I did not want this cat due to her track record with owners. Me being me, I just couldn’t give her away; she was a good friend to half of my family. I have two additional siblings; both have cats and refused to take her. I was very hopeful when I picked her up that my greyhounds wouldn’t eat her, as she bears a strong resemblance to a rabbit (they haven’t)

The cat had the unlikely moniker, Sweetie Pie. I can still hear my mother with her Southern accent  in a high pitched voice exclaiming “she’s my little Sweetie Pie”. My husband decided having a cat named Sweetie Pie would not enhance his masculine reputation and we began to call her Miss Kitty, which was fine with the cat as long as she was provided with ample treats.

The poor cat, after surviving the loss of two humans and a terrible case of fleas came to our house, half bald and weighing six pounds, and was presented with two very large dogs. I took her to the vet first thing and she was fine, but I wasn’t – she had put her claw through a tendon in my hand as I was (foolishly) trying to comb the dead fleas out and my hand was getting infected. So, I took the cat home and took myself to the human doctor. I was given antibiotics and told to immobilize my hand for three days. Of course it was my right hand and I use that one most.

Coincidentally, I had been wearing an Ace bandage on my foot for an ankle problem and I ended up with one on my hand as well. I saw the vet later and he said I looked like I had been to Afghanistan. No, I had not been to the Middle East. It was a minor skirmish in the kitty wars.

The cat took one look at the dogs and went under the nearest bed. The dogs didn’t seem to bear her any ill will – they just wanted to smell her to see what she was. I think. I was concerned because one of the dogs had tried to eat a couple of small animals (no house pets were ever harmed-a snake had an unfortunate demise being trampled to death by 70 plus pounds of Greyhounds at full speed). Eventually all was well and the dogs figured out it was OK and they shouldn’t bother the cat. The cat stayed under the bed for about six months until we went out of town for a couple of days.

We came back, opened the front door and the cat was there to greet us, yowling. She turns out to be quite vocal to the point I had to put a set of steps up to the bed so she could sleep by my head. She was waking me up 5 times a night yowling so I would put her on the bed. My husband sleeps right through it. I have actually trained the cat to use a step stool so she can come and go as she pleases without disturbing me. Or did Sweetie Pie (Miss Kitty) train me? Hmmm…

Here’s the kitty now, she is flea free and weighs over 9 pounds. The weight may just be the fur.