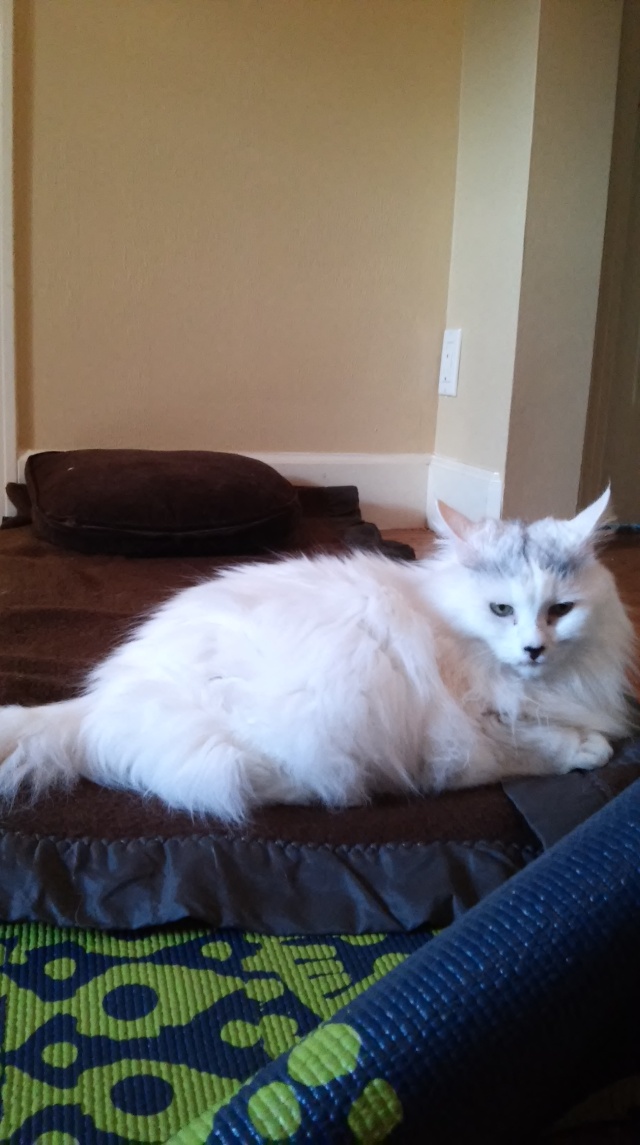 It would be an overstatement to say I practice Iyengar Yoga. I tend to fall off the yoga wagon until my shoulders demand I start practicing again. Recently the cat has decided she needs to join me, but only in the floor positions when she likes to sit on my hair, and pull?!

This cat has a past. Originally belonging to my mother and named ‘Sweetie Pie’ she is now at the ripe old age of 15 and has outlived two owners. I convinced my mother to get another cat after her beloved cat died – 15 years ago. As one of four children I was sure my older brothers or sister would take her if my mother passed on. My mother agreed, saying “I don’t want you to have Sweetie Pie because you have the two greyhounds and she looks an awful lot like a rabbit” Very true. Fine with me. I didn’t really want a cat. When my mother passed my older brother took the cat. Cheerfully.

My older brother suddenly passed on four years later – my two other siblings refused to take her so after a protracted bout with Senior Cat Rescue, I did- greyhounds and all. She arrived at my house much worse for wear, weighing six pounds and half bald she promptly stuck her too long claw through a tendon in my hand and both of us ended up at the doctor. I did not get a rabies shot, but the cat did. No good deed goes unpunished.

My husband thought having a cat named Sweetie Pie would cause others to question his masculinity, so he calls her Miss Kitty. Miss Kitty and the greyhounds have achieved detente over time and while I can’t say they like each other they tolerate each other.

Last summer I took the cat in for annual shots/vet visit. The vet looked in her mouth and said she had cancer of the soft palate and had 3 to 6 months to live. This was a bit of a shock as she looked just fine and was eating well. He showed me the tumor and told me to feed her water thinned canned cat food. The watered down cat food clearly pissed the cat off and she started eating dry food I had inadvertently left on the floor. After a few days of this, I bought some soft centered dry food and straight canned food. She ate that happily and gained more weight, now weighing about 10 pounds.

One morning a few months into the cats purported last months on earth I found a Scorpion in the house that something had bitten the head off. I am pretty sure my husband wasn’t the culprit – then the cat starting joining me for yoga. Her death sentence has passed and her mouth is clear and she eats everything I put down for her.

I am wondering if the Yoga or the Scorpion cured Miss Kitty?

For many years I have held a dream of taking an oh so cute picture of my Greyhounds with Christmas antlers and using it as a Holiday card. Here is the result of my latest attempt. 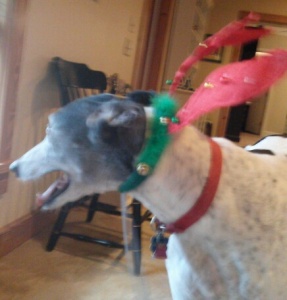 The cat was asleep so I tried it on her:

Cat not even wearing headgear

A few years ago I tried with two dogs, Bullitt and My Girl:

And they got bored:

Is there a treat in the house?

I finally got one good picture of Bullitt: 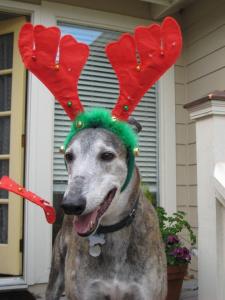 Then realized the antlers should have been behind his ears. After thinking it over, perhaps this is the best solution:

The most cooperative Greyhound

Buy some cards and put the antlers on the concrete Greyhound.

I have a fluffy white cat, she is long haired; an heirloom cat. The cat is heirloom because I inherited her. This cat originally belonged to my parents and then to my older brother, all have passed on – yet the cat is still around. My parents got the cat the year before my father passed on and kitty was my mother’s best friend until she died; then my brother adopted the cat and he passed on. A friend suggested maybe I did not want this cat due to her track record with owners. Me being me, I just couldn’t give her away; she was a good friend to half of my family. I have two additional siblings; both have cats and refused to take her. I was very hopeful when I picked her up that my greyhounds wouldn’t eat her, as she bears a strong resemblance to a rabbit (they haven’t)

The cat had the unlikely moniker, Sweetie Pie. I can still hear my mother with her Southern accent  in a high pitched voice exclaiming “she’s my little Sweetie Pie”. My husband decided having a cat named Sweetie Pie would not enhance his masculine reputation and we began to call her Miss Kitty, which was fine with the cat as long as she was provided with ample treats.

The poor cat, after surviving the loss of two humans and a terrible case of fleas came to our house, half bald and weighing six pounds, and was presented with two very large dogs. I took her to the vet first thing and she was fine, but I wasn’t – she had put her claw through a tendon in my hand as I was (foolishly) trying to comb the dead fleas out and my hand was getting infected. So, I took the cat home and took myself to the human doctor. I was given antibiotics and told to immobilize my hand for three days. Of course it was my right hand and I use that one most.

Coincidentally, I had been wearing an Ace bandage on my foot for an ankle problem and I ended up with one on my hand as well. I saw the vet later and he said I looked like I had been to Afghanistan. No, I had not been to the Middle East. It was a minor skirmish in the kitty wars.

The cat took one look at the dogs and went under the nearest bed. The dogs didn’t seem to bear her any ill will – they just wanted to smell her to see what she was. I think. I was concerned because one of the dogs had tried to eat a couple of small animals (no house pets were ever harmed-a snake had an unfortunate demise being trampled to death by 70 plus pounds of Greyhounds at full speed). Eventually all was well and the dogs figured out it was OK and they shouldn’t bother the cat. The cat stayed under the bed for about six months until we went out of town for a couple of days.

We came back, opened the front door and the cat was there to greet us, yowling. She turns out to be quite vocal to the point I had to put a set of steps up to the bed so she could sleep by my head. She was waking me up 5 times a night yowling so I would put her on the bed. My husband sleeps right through it. I have actually trained the cat to use a step stool so she can come and go as she pleases without disturbing me. Or did Sweetie Pie (Miss Kitty) train me? Hmmm…

Here’s the kitty now, she is flea free and weighs over 9 pounds. The weight may just be the fur.