This is an In A Vase on Monday story. Every Monday morning, Cathy from ramblinginthegarden.wordpress.com invites us to share a vase of flowers from our gardens. The meme is called In A Vase on Monday and gardeners from around the world share flowers from their gardens. I have learned so much from fellow ‘vasers’ and the contents of this vase bear witness to my affinity for IAVOM.

Sometime last summer, Chloris from thebloominggarden.wordpress.com shared photos of the Petunia exserta she had grown in her garden.  I had never seen or heard of this plant and looked it up. To my surprise, this Petunia was rare, from Brazil and grew in cracks on the sides of sandstone towers and is pollinated by Hummingbirds. Sounds perfect for my incredibly well drained sugar sand garden with a bonus of attracting Hummingbirds. I live on the east coast of Florida, where Hummers are not as prolific (I see 3 or 4 a year) I bought a packet of seed (oddly from the US Pacific Northwest)

Not being native to South Florida and really more a plant buyer than propagator, I decided to plant seeds the first of September for winter flowers. They promptly sprouted and were planted in the ground, in pots and gifted to my neighbor to see what happened. They flowered a bit all winter, but as soon as the temperature hit 80 – off they went. I needed to cut them back and they landed in my vase this Monday. Clearly, something has been pollinating them, although I have not seen a Hummer nearby. Here is a close up of the vase, a candle holder from Pier One. 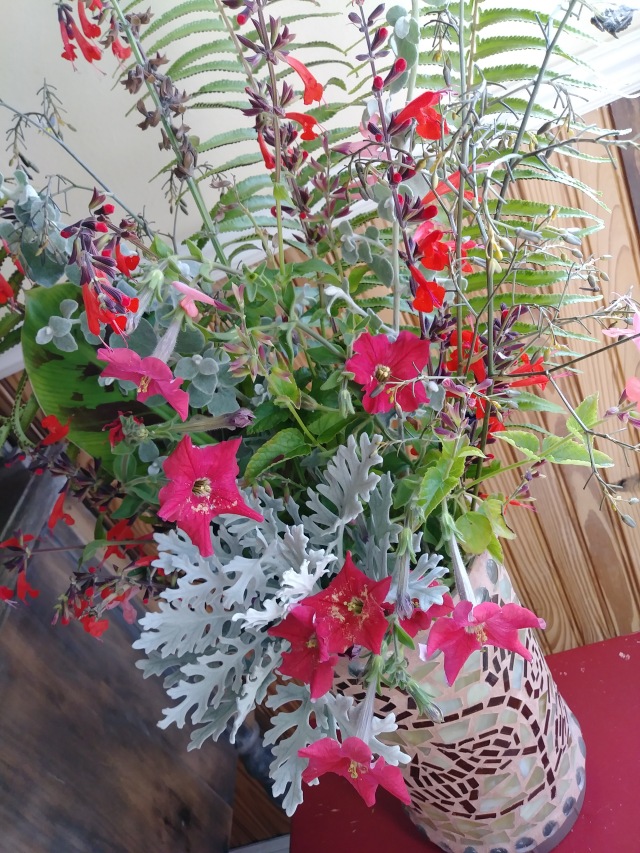 Here is the Petunia exserta in my garden, placed next to a rock to make it feel at home.

30 comments on “In a Vase on Monday – Exserta Experiment”