This morning our temperatures were in the low 70’s with a nice breeze from Hurricane Maria passing by (a long way off). The humidity was down a bit as well, so I worked in the garden getting my vegetable garden going. South Florida’s gardening season is opposite most of the Northern Hemisphere. Summer vegetables are planted in September and October, so I will have tomatoes in the winter. Hopefully. Corn is not even grown in the summer here as it is too hot for the plant to pollinate. 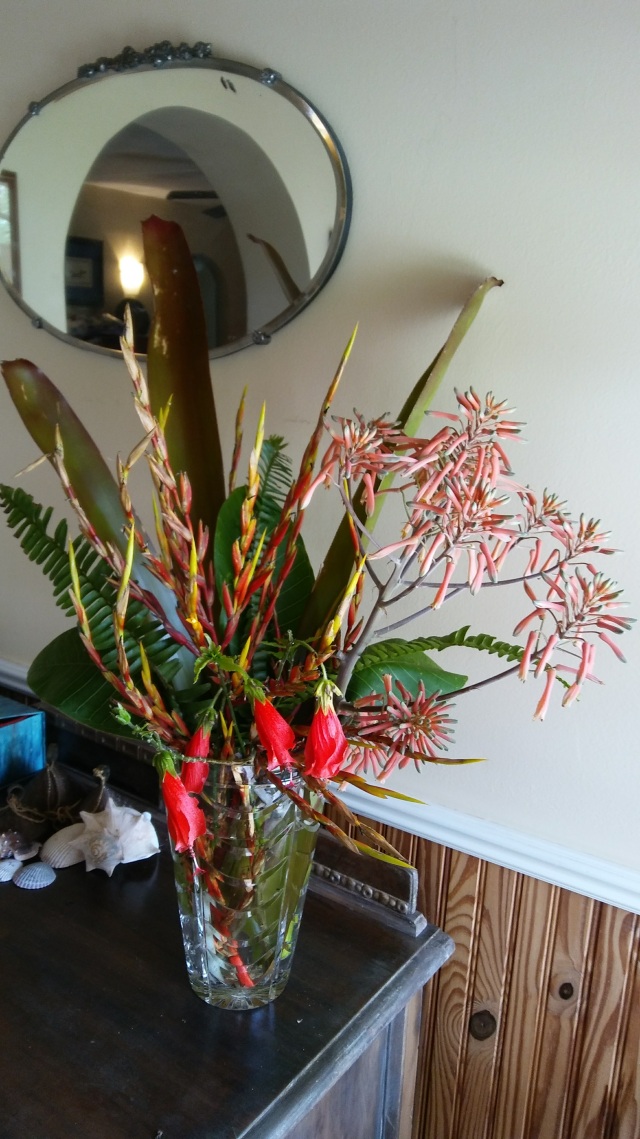 The anchor flower in this vase is a Soap Aloe (Aloe saponaria) which is supposed to be a soothing shampoo ingredient until you read up on it, seems more people are irritated by it than soothed. Stick to the Aloe Vera for relief. The Soap Aloe is the apricot and green candelabra shaped flower. The red flowers are our native Hibiscus, Turk’s Cap Mallow (Hibiscus malvaviscus). The mad funky flowers that look like Lobster Claws are Blanchetiana Bromeliad flowers – Hurricane Irma was not kind to these and I have trimmed the prettier parts for use in this vase. I have been channeling my Southern mother lately and am thinking of drying the rest and spray painting them gold for a holiday wreath. Although, that might be too funky.

The vase is a big crystal affair that was a wedding gift – oh, many years ago from a dear friend who called the day before Hurricane Irma hit “just to hear my voice”, a truly lovely man. The components of the vase are of such a large scale (2 to 3 feet tall) I thought it called for the addition of some big tropical foliage. The smaller leaves in the arrangement are from Frangipani (Plumeria), the long reddish leaves from the Blanchetiana Bromeliad and the ferns are the ever present Asian Sword Ferns.

The vegetable garden under construction. Hard to believe anything will grow in this ‘soil’.

30 comments on “In A Vase on Monday- Soothing Relief”