South Florida is rife with Garden fairs during the winter. This past weekend I went to Botanica in Port St. Lucie. Port St. Lucie is not what I would consider a garden spot, but for some reason they have a great botanical garden run by a very enthusiastic group of volunteers.

Botanica was held at the McKee Botanical Garden. At other times of the year they have a propagation area that sells rooted cuttings from their gardens. It is fun to meet fellow plant nerds and pick up a few Bromeliad cuttings.  Not this time, I pulled into the parking lot and realized this was a bigger event than a few cuttings. At least 4o vendors and a food court. I was in trouble. I had been to the bank.

I walked through most of one side and was not really tempted then through the propagation area. The prices had doubled since last summer, so I was again not tempted. Then I got to the other side of the lake..

The three for 10 dollar Bromeliads! One of the issues with buying Bromeliads in this manner is the sellers tend to have no idea what kind of Bromeliad they have. The seller advised me the larger one had blue flowers and was adaptable to light. Which really means do not plant in full sun or you will charco-broil the plant and be out three bucks. The others I am pretty sure are some sort of Fireball Neoregelia, I have some similar ones in the garden. Now potted, they have joined their friends from my last foray in plant shopping at Gardenfest. 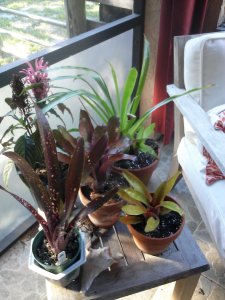 The Palm Man, I believe he was called, grows Palms in his backyard nearby. The Palms were beautiful and so were the prices. I succumbed, and bought two Palms.

One of my favorite interior Palms, a Lady Palm – I can now grow these outside, so I bought one. 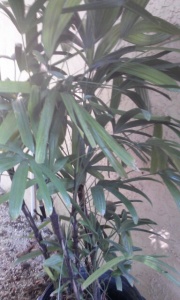 This is a Rhaphis excelsa, native to Southeast Asia Rainforests and highly shade tolerant. I have just the spot.

My next purchase was a Florida Thatch Palm, a new plant to me. One of the three palms native to Florida, this is a Thrinax radiata. Tolerant of sand, sea and alkaline soils. All things I have in abundance. Again, I have just the spot. 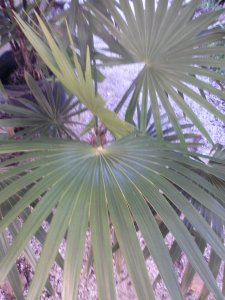 I did not quite violate my ‘never get a cart’ rule. Two nice young men from Junior ROTC showed up with a cart and met me at my car.

I have some planting to do this weekend, lest these palms turn into potted plants and spare parts for future use.

4 comments on “Fallout from Botanica”