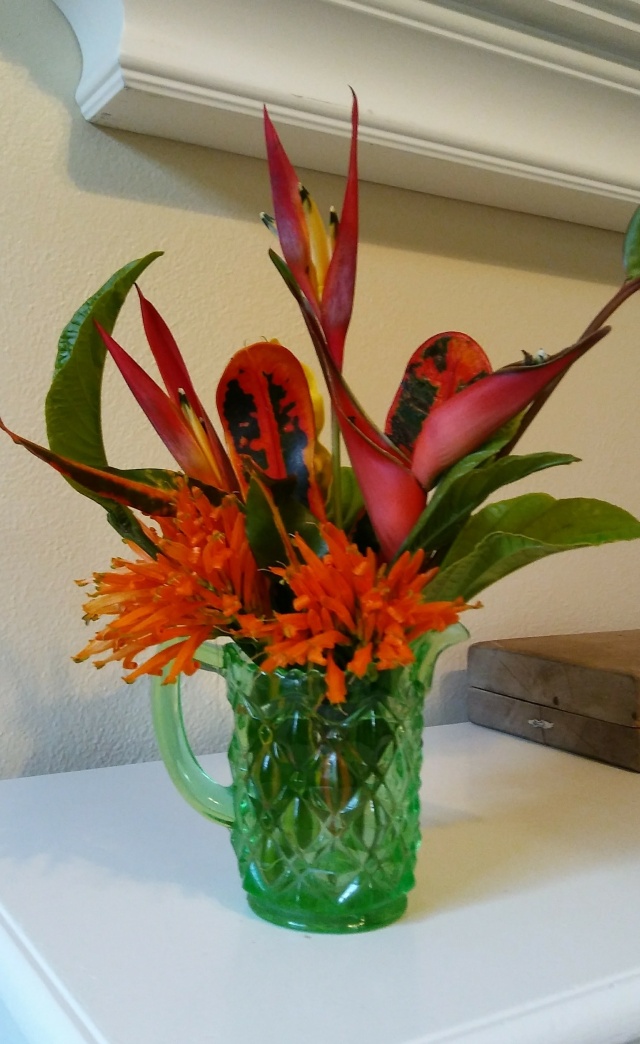 Happily, we are not in Hurricane season in South Florida as of yet. This Tropical Depression is caused by tropical flowers placed in a Depression Glass cream pitcher I found  years ago while cleaning up my parent’s house after they had passed on. I cannot recall where it came from – it could have belonged to someone important, a family heirloom, or it could be junk from a garage sale. The identity of the original owner is lost in the sands of time.

The orange flowers are from my Mexican Bush Honeysuckle (Justicia spicigera). This honeysuckle has just started flowering again after taking a winter rest. Not related to the Lonicera this is closer to Shrimp Plants and is considered a desert tropical that likes regular water – this makes absolutely no sense to me, but the plant is thriving in my side garden and flowers about six months out of the year. So, I like the desert tropicals.

The Heliconias are flowering as well, about half the ones I have in the garden. The other half, both bigger Lobster Claw types are still considering their moves. I find the Lobster Claws have to think for years before flowering. The solid red flower is Dwarf Jamaican Helicona (Heliconia stricta) which is doing well in a very shady area. The red and yellow Parrotflowers (Heliconia psittacorum) like partial shade and bloom nearly year round taking a break during the driest part of the year. The Parrotflowers are just starting to flower again, telling me summer is on its way.

Green foliage in the vase is from the Mexican Honeysuckle, a nicely textured crinkly foliage that is fortunately evergreen. The red, yellow and green twisty leaves are from a Mammey Croton (Codieum varigatum). One of the more varigated plants I have ever encountered, Mammey is a low growing Croton (3′) that is a great accent shrub.

28 comments on “In A Vase on Monday – Tropical Depression Heliconia”