By now I think most of the world has heard of Hurricane Matthew, I had an intimate experience with him on Thursday night as the eye of the hurricane passed about 60 miles from my house. The power went out about dinnertime and the storm as predicted started in earnest a few hours later. I was in my Living Room with one of my dogs (very unhappy) the other dog and my husband slept through it. Hurricanes tend to get really windy going in one direction, then as they pass it gets really windy going the other direction. The winds were somewhere around 100 mph and when the directions changed sometime around midnight a couple of of trees imploded in the backyard and hit the roof. About that time I could hear the screws in our metal roof popping. I was just waiting for the metal part of the roof to peel off and fly away, but fortunately it remains intact. The dog became so upset he was barking at the back door. Our porch was shuttered so we walked outside – it was difficult to open the sliding glass door and I was able to feel the suction of the passing storm.

We went back inside and I gave the dog a Valium, he settled down. By candlelight, I searched out an airline bottle of Glenfiddich someone had given me years ago, rooted a lemon out of the refrigerator and fixed a Scotch and water with a twist. Sometimes a stiff wind requires a stiff drink. Alan the Greyhound and I both felt better. Not much, but some and the wind howled on..

Eventually the storm passed and we went out the following morning to find our Rainbow Eucalyptus stripped of all its branches and my Plumerias decapitated. All in all, we came out the storm intact and our power was restored within 24 hours. The Rainforest Garden suffered a storm of debris, the garden is a little smushed but not destroyed. Much tidying to do.

Saturday we collected all our canned food, extra shorts, shoes and t shirts and sent them off to the Bahamas, where Matthew took a much greater toll.

Surprisingly the Tropical Gardenias (Tabernae montana divericata) were blooming in time for Monday’s vase. The white berries are hard to see, but I cut them from Wax Myrtles (Myrica cerifera) that was blown apart by the storm. Asparagus Fern and Asian Sword Fern add a little green texture to my mother’s Rose Bowl. 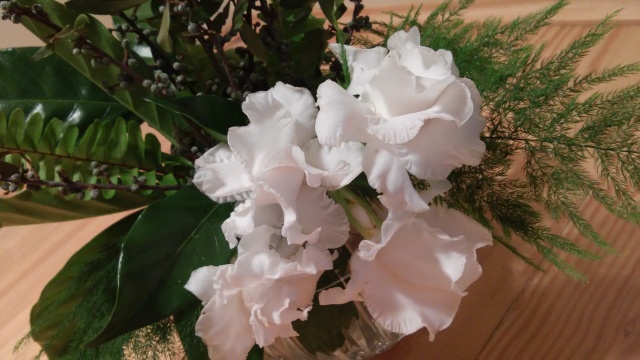 Below is a post I started before the storm, not knowing what would be left.

Hurricane Matthew is set to strike here tomorrow, so this is actually A Vase on Wednesday. I was not feeling optimistic about my Heliconia making it through the wind so I cut them and the crunchy Aloes. Flowers in the house might make the hurricane more bearable. Alcohol and Pepto Bismol might really be a better answer to that problem. My neighbors are sitting on the front porch drinking wine and it is early afternoon. They are longtime Floridians. 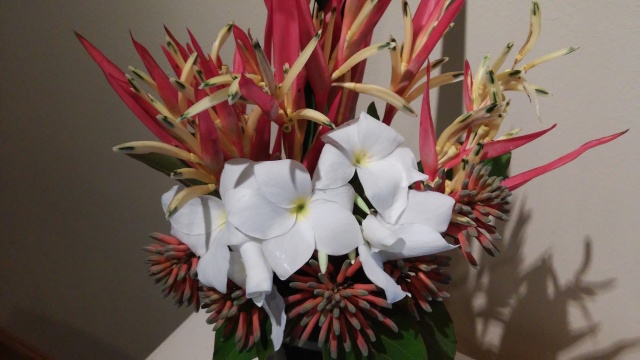 This is my save from wind damage plant palette: Parrot Flower (Heliconia psittacorum) in yellow and red, Bridal Bouquet Frangipani, Soap Aloe (orange and green) which is Aloe saponaria. The foliage is from Firebush (Hamelia patens var patens) and in back Shell Ginger (Alpinia)

Here is the view of our screen porch, fully enclosed with storm shutters. My Cactus Zinnias, Italian Sunflower and Aster seedlings are riding the storm out in here. Fingers crossed.

26 comments on “In A Vase on Monday -Flowers for Matthew”