My Bridal Bouquet Frangipani was getting too tall, so I planned an arrangement around the prunings. This variety of Frangipani is columnar and tends to break apart in thunderstorms, if anyone else is familiar with the dreadful Bradford Pear (I hope that tree never made it out of the US) the branching structure of this Frangipani is similar and breaks in the same way. The problem with the branching structure of both these trees is that the branches are held at such a steep angle to the trunk the weight of the foliage breaks the branches and sometimes the trunk splits.

The good news is the Frangipani usually doesn’t get more than ten feet tall and rapidly repairs itself if branches break off. This arrangement is four or five feet tall, so there is plenty of shrub left and it looks reasonably good. Better than broken in two anyway.

The red accents in the arrangement are just for fun. No pruning was needed, it just happened. The tall red element is a Raggedy Ann Copperleaf (Acalypha “Raggedy Ann”) A somewhat unfortunate pruning story. This plant is the closest thing to a Japanese Maple that will grow in Tropic Florida. Japanese Maples are one thing I pine for in my garden- so I bought this thinking I could prune it into a tree form ‘Japanese Maple’. Reality is this plant has none of the graceful habit of a Japanese Maple and is totally upright and frankly kind of scraggly looking, especially after tree forming by someone trying to make a Japanese Maple.

The big red foliage leaves are from Blanchetiana Bromeliads, I love these plants for their coarse highly colored foliage and crazy flowers. It took me a couple of years to figure out how to cut the leaves off – kitchen scissors, go figure. 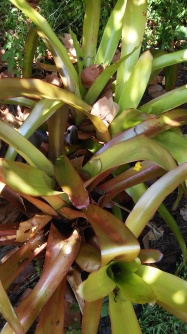 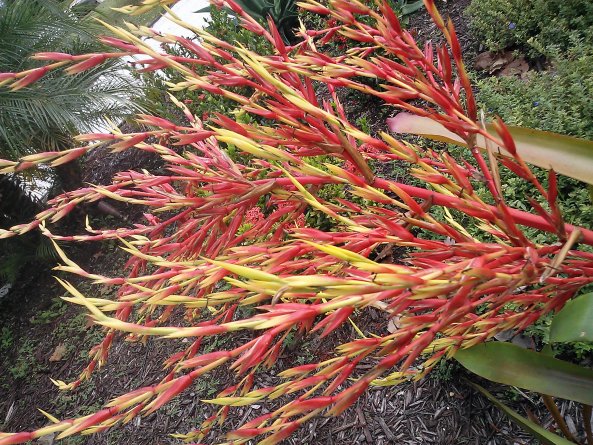 Here is a close up of the flowers in my arrangement:

18 comments on “In A Vase on Monday – Prunings”