These are currently blooming in my garden and have been for a week or so. The flowers look a bit like a panicle of red hots with a few touches of periwinkle blue. In the realm of Bromeliads, these are terrestrial, which means they root in the soil, and they have tanks, botanically speaking, the leaves form a rosette creating a reservoir in the center of the plant that holds water and traps various insects and debris feeding the bromeliad. The image below is looking down into the tank. The foliage has a nice grey green variation and is attractive year round. 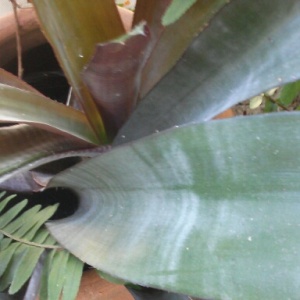 The tanks are a bit of a maintenance chore sometimes because they trap more junk than you would think. I have some tongs to fish debris out and then I usually put some BT granules in to discourage any mosquitoes from hatching out.

The plant itself ends up about 18 x 18″ , so it is a nice size for addition to a shady perennial bed. These have reliably reproduced one or two pups per year, so not really invasive, but they are living among friends now.