My mother always enjoyed making (really me making them while she watched) Tussie Mussies, she just thought they were ‘so cute’. I seem to have an abundance of not very long stemmed flowers so I decided to put together a Tussie Mussie or two. 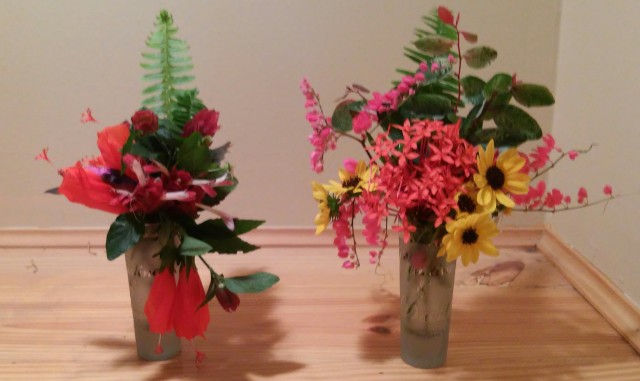 Tussie Mussie is a term for a small bouquet of flowers that has been around since medieval times, the Victorians used the selected flower type to send a message to the recipient of the Tussie Mussie. Each flower in the bouquet had a meaning. In reading the dictionary of flower meanings,  I found that Victorian England was not awash in the plants I have here in Tropic Florida. The only plant messages I could find in my Tussie Mussies are Dwarf Sunflower means adoration and Fern means magic. So, I am saying to you with flowers – I adore the magic of my garden. I can cope with that. Oddly enough, in Victorian flower dictionaries there were meanings for chickweed. If chickweed appeared in a flower arrangement I received, I would tend to think there was something wrong. The meaning from the dictionary – I cling to thee. Beware the man that sends chickweed bouquets.

This arrangement is in a tequila shooter from my niece’s wedding; my tequila shooting days are long over but it makes a great little vase.

The plants are Turks Cap (A native mallow in Florida) the red flower, the darker red flowers are Red Shrimp Plant (Justicia brandegeana) a leaf of a Copperleaf (Acalphya wilkesiana ‘Raggedy Ann’) and a few Boston Fern fronds.

I have a pair of tequila shooters, this one has a Dwarf Red Ixora, Beach Sunflower (Helianthus debilis), Coral Vine (Antigonon leptopus) and a backdrop of Hawaiian Snow Bush (Breynia nivosa)

Here’s hoping everyone is adoring the magic of the garden, this first week of 2016!

16 comments on “In A Vase on Monday – Tropical Tussie Mussies”