The driveway is in and it is a beauty. I am so excited after all those months of living with the weed pit as my front yard. The existing driveway was pea gravel overrun with weeds. The entire thing had to be scraped away and hauled to the dump.

After the scraping and removal of the foul pea gravel a gigantic pile of shell and base material appeared. The driveway is constructed by scraping off enough material to have 4-6″ depth to backfill. The base area is graded for water to drain off properly then a base material is placed. The base is crushed shell about 2″ thick followed by 2-3″ layer of the shell for the driving surface. The crushed shell base looks like coarse sand and the shell topping looks like thousands of tiny shells. Because that is what it is. Theoretically,the crushed shell base course tamps down over time and forms a permeable stable layer for the driving surface. 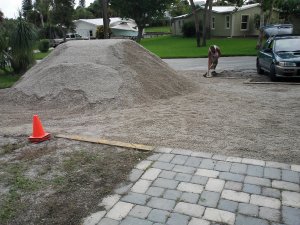 Shell used for driveways is quarried for the most part on the West Coast of Florida. I believe the shell in my front yard comes from the South side of Lake Okeechobee. This is to a certain extent a word of mouth bit of info. The shell is from a broker who bought it from somebody who bought it from somebody else. Interestingly enough the shell is cheaper than pea gravel because it doesn’t have to be shipped as far from its source. Shell is not supposed to sink into the ground as gravel does, I am going to be interested to see how it holds up… TA DA, the driveway:

Now, onto the green part, Landscaping. Note the repulsive grass/weed groundcover..Ugly. Soon to be gone.